What is a Commissioners’ Court and How it Works 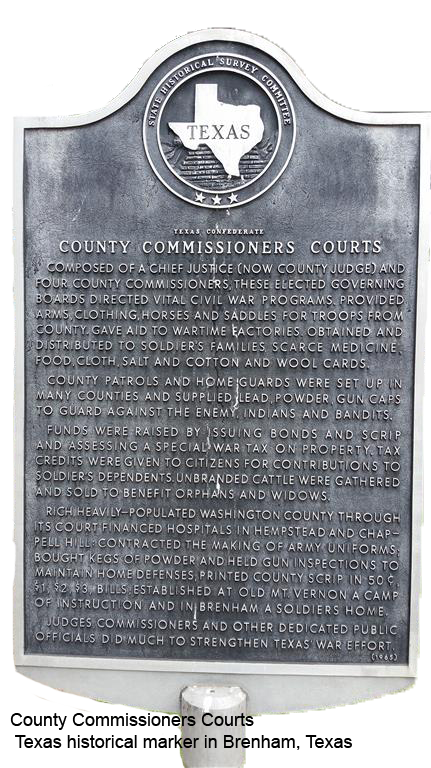 The governing body of each of Texas’s 254 counties is the commissioners court (spelled without the apostrophe). In Texas, the court has five members: the county judge and four commissioners. A sixth official, the county clerk, is an ex officio member of the court.

In most instances, a simple majority of court members is sufficient to take action. Three voting members of the court constitute a quorum. The commissioners court operates similar to the "weak" mayor-council system; the county judge has no veto power over the court and votes along with the other commissioners.

Counties are constitutional subdivisions of the state. As a principal institution of county government, the court’s role combines elements of judicial, legislative, and executive functions. Other institutions of county government include independent elected and appointed officials, such as the sheriff, and independent boards, such as the board of judges. The Commissioners Courts in Texas are served and provided continued education by the County Judges and Commissioners Association[5] events and the official association publication County Progress[6].

In Texas, the relationship between institutions of county government is designed to be independent and adversarial. In this framework, the principal power of the court is the power of the purse. Each year, the court adopts the county tax rate and the county budget, setting the salary and budget for independent elected officials, as well as outlining expenditures for departments under the direct control of the court. As the administrative head of county government, the court has the authority to enact county-wide policies, and to the extent provided by law, to enact legislation in the form of court orders. The court also exercises varying degrees of oversight over subsidiary county boards and commissioners, which may differ from county to county, but which commonly include drainage districts, irrigation districts, housing authorities and the like. In some instances, the court may also serve as the board of directors for these special districts or authorities, as well as fulfill the role of county school board.

Each voting member of the court has one vote. The county judge serves as the presiding officer of the commissioners court, while the county clerk is charged with keeping the minutes of the court, and attesting any actions it make take. State law requires, except in cases of emergency, that an agenda of the items to be considered by the court be posted at least 72 hours prior to its meeting. Among counties, the process for placing items on the agenda, and posting it, varies widely, with the task most often falling to the county judge, the county clerk, or a specially appointed court clerk.

Additionally, state law provides that the court must designate its term, or the time, place, and interval at which it will sit, at the beginning of each fiscal year. Any meeting not held according to the term is considered a special meeting. Legal precedent also provides that no action taken by the court may bind the county beyond the term of the court.

In addition to their roles on the court, the county judge, county commissioners and county clerk each have independent roles to play within county government.

The county judge serves as the chief administrator of the county, and as the presiding judge for justice and county courts. In some counties, the county judge exercises judicial functions as a probate and/or county court judge. Even in cases where county judges do not conduct judicial functions, they retain the power to conduct marriages and may also be called upon to conduct administrative hearings, such as those pertaining to liquor license applications.

The county clerk is responsible for recording legal instruments, including birth certificates, marriage licenses, deeds and titles, and for keeping the records of county and justice courts. The county clerk is also a statutory member of certain boards and commissions, such as the elections commission, and may also serve in other capacities as provided by law or local practice. They are elected county-wide to a four-year term. Wiki